'Inside Hitler's Bunker', by Joachim Fest 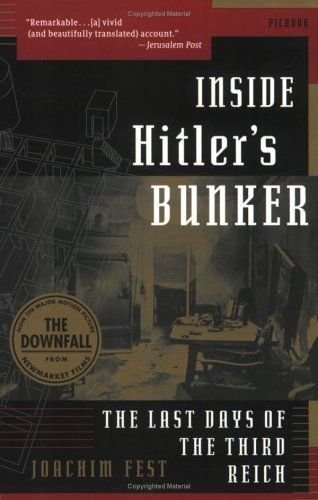 Can fiction ever compete?

Joachim Fest introduces us to this truly exceptional study in his foreword by the opening line:

‘No catastrophe in recent history is comparable to the collapse of Germany in 1945.’

What I would add is that there can be few books on the subject comparable to Joachim Fest’s ‘Inside Hitler’s Bunker’. And however clichéd my following line may sound, it IS plain to read that Fest did his homework, for the results are outstanding.

Humbly enough, toward the end of the foreword, he states that the authors named at the back of the book deepened his insights into the sequence of events, “though a comprehensive portrayal, both of what happened and important background aspects is, it seems, still needed”. Indeed, he calls it a “sketch”, and a “step in the right direction”. And yet, let’s remind ourselves, something of a New Millennium cinematic masterpiece was based on this book. ‘Downfall’.

It is an outstanding, informative, erudite piece. And wherever Fest is unclear of the validity of information, he says so.

If only fiction could be like this. Because none can ever match this story, most of which we may now accept as historical fact, “sketch” or no sketch.

The book primarily covers the final living days of Adolf Hitler and his Third Reich, during the Russian offensive. It looks at a country ‘led’ by a man who barely saw light of day, who was prone to fits, and who had fallen deeply into the realms of delusion: he’d fight battles dependent on non-existing armies, order generals and advises who’d dare not to contradict him. And further still, we not only witness the extremes to which a madman was prepared to go, but how his ever loyal entourage, right down to kids on the street, as in Hitler Youth, for whom Hitler would show his face from time to time and offer gratitude, was ready to go the full distance also, come what may, and for a man who never had or believed in a plan b. The sole object was to destroy.

Philosophically, the book also introduces us the idea of Hitler in German history. Was he a product of consistency rather than a German catastrophe? It is a truly fascinating question, a question remaining open today, and in order to make any kind of sense of it, we need to go back into Germany’s distant past. And yet Fest succeeds in making all this accessible in a novel-sized book of fewer than 200 pages.

If you haven’t read this book already, then it’s a must. And even if you’re not necessarily interested in Modern History, or non-fiction in general, I’m sure you’ll still end up reading it at least twice.